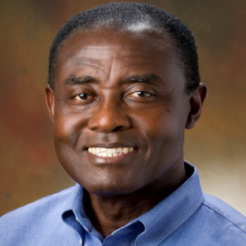 Prof Kwaku Ohene-Frempong, M.D., was born in Ghana and came to the United States in 1966 to attend Yale University. He received his Bachelor of Science degree in Biology in 1970. After graduating from the Yale School of Medicine in 1975, he trained in Pediatrics at the New York Hospital - Cornell Medical Center, and in Pediatric Hematology-Oncology (1977-80) at the Children’s Hospital of Philadelphia (CHOP). Following a 6-year service at Tulane University Medical Center to develop a Sickle Cell Disease Program in Louisiana, he returned to CHOP in 1986. Dr. Ohene-Frempong has organized and been involved in several research projects through the Comprehensive Sickle Cell Center at CHOP and is devoting an increasing amount of time to sickle cell disease program development in Africa.

In Ghana, he developed the first public health program for screening newborns for sickle cell disease in Africa. With assistance from the government of Brazil, he is working with Ghanaian colleagues to scale up the newborn screening project into a national program. Ghana launched its National Newborn Screening Program for Sickle Cell Disease in November 2010 with Dr. Ohene-Frempong as the Program Coordinator. Dr. Ohene-Frempong is now Professor Emeritus of Pediatrics at the University of Pennsylvania, Senior Scientist and Attending Hematologist, and Director Emeritus of the Comprehensive Sickle Cell Center at The Children's Hospital of Philadelphia. He is also President of the Sickle Cell Foundation of Ghana and a founding member of the Global Sickle Cell Disease Network.

In 2010, Dr. Ohene-Frempong chaired the Organizing Committee for the 1st Global Congress on Sickle Cell Disease held in Accra, Ghana. In his work in Ghana, he is collaborating with colleagues in the US, UK, Canada, Brazil, and throughout Africa to strengthen both the public health and laboratory aspects of the National Newborn Screening Programme.